‘I want to tell you it was a nightmare, but it wasn't.’ A photo from Bucha that helped a son find and bury his father
Глеб Лепейко
Глеб Лепейко
9 мая 2022, 12:13
ВойнаТексты 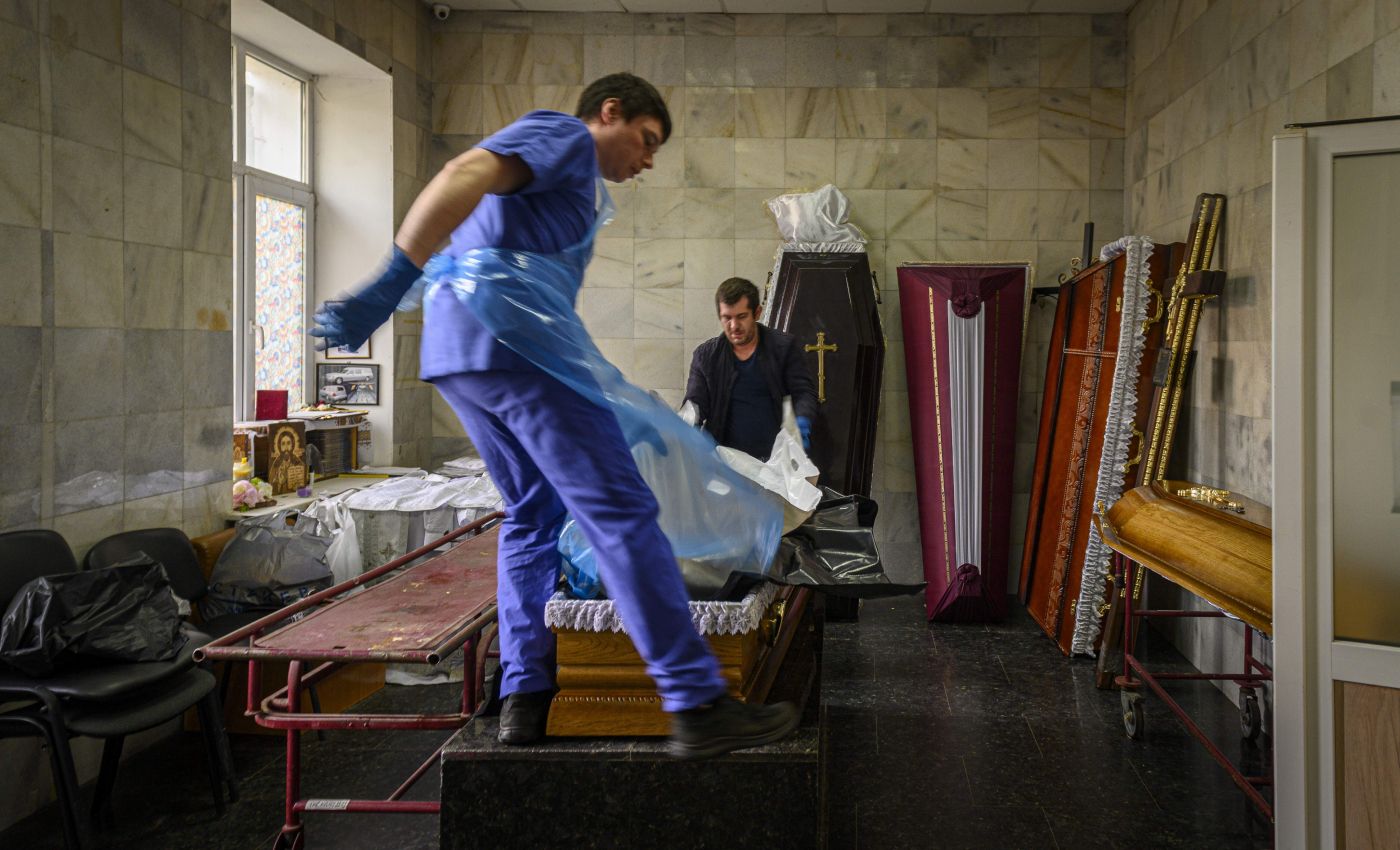 After Russian troops withdrew from Bucha, a Kyiv suburb, they left behind dozens of bodies scattered around its streets. Shortly after, photojournalists were able to document the gruesome aftermath. One of the photos shows a male body lying in a car pit with a head wound. US photojournalist Christopher Occhicone tells the story behind this photo and describes how it helped a son to find out about his father’s fate.

First of all, we obviously heard what happened in Bucha. It was very difficult to get there. When we heard — I think it was April 3, — that it had been cleared, we went straight there. We actually got there when they were raising the Ukrainian flag over town hall. We heard about these things, and there were a few videos that guys from the Ukrainian army had put out. We didn't know where it was, we knew that something bad happened.

We also heard things during the evacuation of Irpin which myself, a Polish photographer and a couple of other guys were photographing. But then we ended up going in with volunteers, helping out with evacuation, and hearing all kinds of stories about violence against civilians. Everything that has come out — we heard about it weeks before. There were rumours, but you couldn't see. In Irpin you could see, but in Bucha it was on another level.

So, we went in and we were looking for this. Probably the most well-known and first big public display of war crimes was what happened on Yablonska street, where all these bodies were on the street. And we were looking for it. Some of the local guys, soldiers took us around. We didn't know where it was, and they didn't know where it was, they just knew there was a street with bodies and people tied.

So, we were looking, and some guys saw us and were like, "Hey, you need to come look at this". And we went into this industrial zone, with different mechanic shops etc. And they showed us in the inspection pit for the car, there was this man who was clearly executed. You don't know what happened, you can see kind of from the scene of the crime.

This really kind of struck of all the different people that we saw there murdered, this one really just reminded me of my father, to put it simply. You know, my father was an automechanic. And this guy was an older man. You can make a little imagination in your head, and it bothered me a lot.

So, keep working, and photos published, which was really good that a lot of the hard photos were published in the Wall Street Journal, because a lot of newspapers want to show what is going on but they don't want to upset people who are eating breakfast and reading the Sunday newspaper. It was good of them to publish it because it needs to be shown.

Myself and my girlfriend went to Romania, I needed a break. I have been going nonstop since the beginning of January. The runup to the war, then the war started at this next level. So, gone to Romania, and one evening, at 9 o'clock I got a message from a city council woman who is helping families to identify the bodies. And she said that a young man called them and said that he believes this is his father [in the photo].

We started talking, and she said they are going to come to Kyiv in the morning, if you could know if it is possible [to come as well]. I'm in Romania, but all of this obviously affects you personally, but this particular case, and the son is gonna be there, maybe we could find out what happened, who was this man, so let's go.

So, we drove overnight from Suceava in Romania all the way to Kyiv, got there in the morning, went straight to the morgue, and we met the son, his cousin and his father-in-law. We spent the day with them, and it was a long day. You're in the morgue, the morgue was full, and there were two trucks outside, and they were filled with bodies, like filled. And so, you got to open up a bag and look.

This guy was last seen on March 3 or 4. We saw him on April 3, a month later, so now it's like the 24th or 25th, so you can imagine the state of the body. It's rotten, it's completely rotten and swollen, it's awful. And looking at the tattoo of his own and his jacket were really the only things we could identify him with. He had no documents, no other personal items, I will tell you what happened.

This family was very open to me being there, and photographing them and hopefully telling what happened to their father, their relative. We spent the day in the morgue, identifying. Just waiting, it's hours, and, keep in mind, there are people coming while we are there, just people coming, opening up all the bags outside, going to the truck looking, and the smell of rot meat, it's sickening, it's hard to describe, it smells like you forgot a piece of pork in your refrigerator for too long. It smelt like that by 10 thousand times stronger. Just awful.

And all these people coming, and they are coming with a photo, they are showing it to people and trying to help them figuring out where to start looking, and then they are looking in. I mean, you are watching, for example, a wife and a brother looking at a body and arguing, "It's him! — It's not him". Because they are in such bad condition. It's like a crime after a crime, and an additional crime, you know what I mean? Just making it more difficult for families, it's hard to watch, but, you know, whatever, it needs to be shown.

So, then we went to Bucha, and what did we learn about this guy. He is a priest, an orthodox priest Myron Zvarychuk, he was renting a room from an older woman, a little granny, and he was working at a church there, and earlier he worked at St. Michael's Golden-Domed Monastery, which is an iconic church in Kyiv. Even during the early point of the war it was used as a base for paramedics working around the city, they were sleeping in the basement there, a hundred guys, paramedics. It is kind of a central place, so it was another level of insult that they murdered priest. And Ukrainian orthodox priest. It's like you are going after religion, it touches on a lot of levels.

We got to Bucha, and this old woman knows he is missing, you can assume he is dead, but you don't know, and obviously everybody holds out a little bit of hope. All the people holding out hope reminds me of New York, I'm from New York city, and after 9/11 people were still looking for relatives a month later. Like you know they are dead but you don't know for a fact, so there is always a little bit of hope, I don't know why, but somehow.

We came, and she never met the son before, but the son looks like his father, and as soon as she saw him, she understood. It was very hard. This woman is an old lady with a little house, and renting a room for the priest. You know, she has a family that didn't really take care of her, so this priest was caring for her, she is old. How he disappeared: she spoke to a volunteer who said, since it was an occupation, "we got food and water for you, you can come and get it" at the point not far away. And the priest obviously said, "I go get it".

There is still an investigation, but what they understood is that Russian troops knew he was from Ivano-Frankivsk, you know, Ukrainian speaking, Ukrainian orthodox priest, and they were like "we have ourselves a bandera here, let's go get him," and he was seen running and being chased and ran into that place — and that's it.

We went back to Kyiv, took a body and drove all the way to Rosil’na village near Ivano-Frankivsk. And I have never really seen anything like this. A village funeral. It was two hours in his sister's house, then an hour outside the house, then we moved to the church, stopping every hundred metres, like the whole village in the procession. It was very powerful. And then to the church, and another two hours in the church, and then the procession moving, and every hundred metres stopping for prayer. It was, I don't know, eight hours of funeral.

So, it turned out, this photograph helped them find the father, they wouldn't have found a body if not. While we were there, in Bucha, getting his things, they wanted to see where we found him. So we went to that spot, and we were looking around, and we found a pile, and it was burnt. So, they burned his passport, we found it like a burnt passport, burnt money, his car keys were melted, and his powerbank, his phone.

I want to tell you it was a nightmare, just to see all of these [things], but it wasn't. It was like a dream, like you are there, you are seeing this, [but] you are with these people, and like totally nice people. I don't know how to say this, but villages in Ivano-Frankivsk, people are religious in this area, and very orderly, very proud people, they are very patriotic, very proud. Different, let's say, [to] villages in Donbass, totally different. Everything is perfect, everything is in straight lines, flowers are perfect, the trees. You are seeing people like that, guys who came to the funeral might be wearing suits that are 30 years old. And if you study the suit, you could see, around the edges it's a little frayed, but everything is perfectly clean, everything is ironed, totally proud.

It was really a level of tragedy. This guy was a loved person, people loved the village priest.